The Land Art movement, also known as Earth Art, is part of a conceptual art movement of the 1960s and 1970s. Its works are made directly in nature, sculpting the earth itself or creating structures with natural materials. This movement claims the inescapable connection between human beings and the landscape, provoking sensations in the viewer that make them immerse themselves in nature through the work. Land Art is a hybrid between sculpture and architecture, turning the landscape into a canvas on which artistic expression takes shape, transforming and eroding, changing and disappearing.

Why did Land Art emerge

Following the heyday of the minimalist art movement, Land Art was part of the broader conceptual art movement that existed at the same time, when the traditional and formal elements that governed artistic creation were questioned. Land Art aimed to raise public awareness of our relationship with the natural environment through various thought-provoking works of art.

The artists of this movement explored the boundaries of art through the materials they used and the location of the works, often intervening directly in the landscape to construct their sculptures and installations. Their works were often sculpted from the earth itself or made into art using natural materials at the artist’s disposal.

Preferred materials included earth, vegetation, rocks, gravel, stones, twigs and water that were often found on site, and the inclusion of these materials honoured the specificity of the site.

Heavily inspired by prehistoric works such as Stonehenge and the Pyramids, Land Art was often created in remote areas, far removed from urban society and quite inaccessible. Their eventual disintegration emphasised their ephemerality, creating a stark juxtaposition with art that was traditionally safeguarded within galleries and other guarded environments.

This alteration of place challenged the idea that art exists as something merely visual, as the Land Art movement protested against the ruthless commodification of art during the 1960s. These works explored a return to nature, which stimulated the development of the environmental movement that saw the Earth as humanity’s true home. Thus, Earth artists began to sculpt an Earth art that celebrated this ideal, and these works showed a total rejection of urban existence.

Land Artists that made an impact

Land Art was created by a group of pioneering artists who investigated natural sites as an alternative mode of artistic production, in order to bypass the commercial art system and create the purest art.

One of the most notable pioneers of this movement was the American artist Robert Smithson, whose 1970 work, Spiral Jetty, is the most famous Land Art sculpture to date. Smithson placed rocks, seaweed and soil to form a 1,500-foot spiral jetty extending into the Great Salt Lake in Utah, USA. This work, which still exists today, is periodically visible depending on fluctuations in water level.

In 1968, shortly after the publication of Robert Smithson’s essay “The Sedimentation of the Mind: Earth Projects”, the “movement” made its first appearance in an exhibition entitled “Earthworks” held at the Candace Dwan Gallery in New York.

Outside the United States, the main postmodernist artists involved in land art are: the British sculptor and mixed media artist Andy Goldsworthy, the British sculptor Richard Long (born 1945) and, of course, the German experimental artist and avant-garde sculptor Joseph Beuys. Bulgarian sculptor Christo Javacheff (b. 1935), known for wrapping buildings and landscapes in fabric, is also associated with the movement. 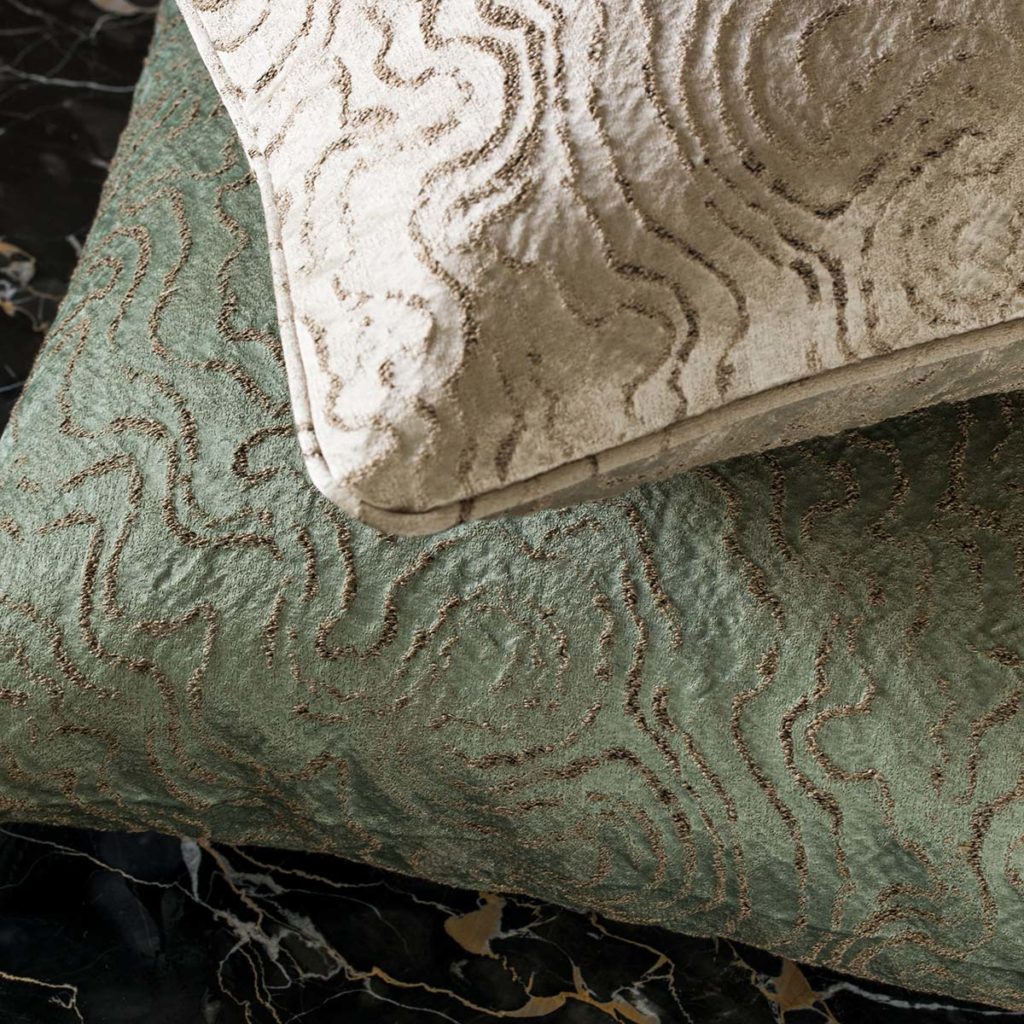 An inspiration for Lizzo

Lizzo’s Land Art collection shares the intention of understanding and participating in the natural environment, the union of man and nature. Its textures elaborated in rich reliefs speak to us of the earth and a colourful content brings us closer to the essential: marsala red, celadon green, emerald accents, intense golds or geological pinks. Wool takes centre stage and its combination with subtly shimmering fabrics seeks the perfect cohesion.